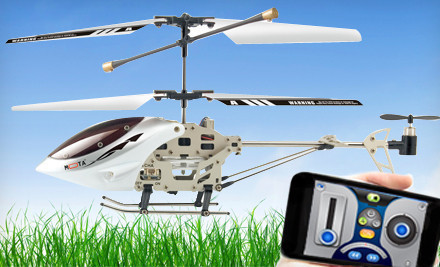 Those of you who know me know I love electronic gadgets and if I had an iPhone instead of an Android I wouldn’t be able to pass up this deal at Groupon!  For only $29 you can get a remote-controlled chopper that reacts to its owner’s taps and tilts on iPhone, iPad, or iPod Touch. Shh… I still might get it for my wife since she has an iphone.. and then of course I’ll have to show her how to use it and stuff!

The Mota helicopter loftily slices through tropospheric air, hovering and maneuvering at the command of its iPhone, iPad, or iPod Touch owner. From a distance of up to 20 feet, pilots control their chopper via a free app. The app allows operators to choose between using their device’s touchscreen or accelerometer to dictate the helicopter’s flight path. The mechanical bird arrives fully charged and recharges via USB. First-time users only need to download the free app and mail a thank-you card to the Wright Brothers before taking to the skies.